The Treatment Of Whiplash Related Injuries With Acupuncture 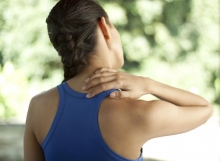 The two most common ailments that I treat in the clinic are neck pain and back pain. Out of the nearly 1500 treatments I did in 2015 at least 1200 of them involved some element of neck or back pain. Of course, pain is not all the same and injuries to these areas can be caused by dozens of different factors: poor posture in the office, trauma caused by a fall, improper movement during weight bearing activities, arthritis due to the normal aging process, having a rear-naked choke improperly applied by that overzealous guy at Jiu-Jitsu, the list goes on. Some conditions, like severe spinal stenosis, can be very resistant to treatment, but others, like whiplash, seem to respond extremely well.

“I had been seeing a chiropractor and PT 3 times a week nearly 2 months prior, didn't help. For a whiplash neck injury from a car accident I felt like my neck was possessed by an evil monster… I couldn't tell Sean much except my neck hurts, badly. I felt Sean's initial examination was extra long. I understood why as soon as he sank those needles into that twisted monster. The monster was finally being fired at head on... for the first time. Following the first visit, I went 2x a week, then 1x a week. Every time, the little needle on Sean's fingertip was the predator of this monster that lived in my neck. I am very happy about Sean's efficient, accurate, no nonsense style of treatments.  As far as I am concerned, Sean is to sports acupuncture as Bruce Lee is to Martial Arts. No kidding!” Ann G.

Whiplash injuries occur when there is a sudden and forceful change in acceleration. This most commonly occurs during a motor vehicle accident, however any sudden and forceful change in acceleration can cause whiplash. During the incident the muscles around the base of the skull, neck, and spine are stretched beyond their maximum capacity leading to microscopic tears in the muscles, tendons, and ligaments. When tissue is torn it causes small amounts of bleeding, when blood moves outside of the circulatory system it causes inflammation and inflammation leads to pain, swelling, and stiffness – these are the most common symptoms of a whiplash injury. It’s very common for the symptoms of inflammation to take 2-3 days or even longer before they fully manifest; many people who are in a motor vehicle accident are in shock and feel no pain at all immediately after.

“I was in a car accident exactly one month before I was to begin training for IRONMAN Maryland. Sean was working against the clock but through acupuncture, managed to heal the pain I was feeling in my neck and left glute. Throughout my training, I never experienced any flare ups and was able to cross the finish line seven months and 140.6 miles later.” Ivy S.

Whiplash injuries are not limited to physical trauma. Symptoms of neurological trauma can indicate a concussion or peripheral nervous system damage and may include tinnitus, amnesia (most commonly an inability to remember the exact details of the accident), vertigo, loss of balance, numbness, tingling, burning sensations, and more.

“After my car accident I was plagued with very painful and random nerve pain. I would suddenly feel very hot burning sensations in completely random joints in my body due to nerve damage as a result of whole body whiplash. The pain would last from 20 - 30 minutes then disappear only to reappear 30 or 40 minutes later somewhere else. Working with Sean made an immediate and dramatic difference to this symptom... I do not think I would have healed completely without acupuncture.” Laurie M.

It’s common as an acupuncturist to hear a new patient with whiplash say something like, “I tried physical therapy, I saw a chiropractor, I took the drugs that they gave me at the hospital, nothing has helped me so far. You’re my last hope.” Within 2-6 treatments (depending on severity) I consistently hear these same patients tell me that they’re finally starting to really feel better and acupuncture is the only thing that’s helped them. Part of the issue here is what’s called Selection Bias. Selection Bias means because I’m an acupuncturist I tend to see more people who are cured by acupuncture versus a physical therapist who would probably see more people who are cured by physical therapy. However, a quick search yields dozens of compelling studies that show acupuncture is great at treating the pain of whiplash and some research even suggests acupuncture may be better than the traditional Western Medicine approach (anti-inflammatory drugs, massage, physical therapy) for treating both pain and the long term balance and core stability issues that are associated with injuries to the small muscles at the base of the skull.

“I had been in a car accident in June and suffered some whiplash in my neck. A friend of mine recommended a chiropractor, so I went. Spent 2 months going 3 times a week, and while it was certainly better, I was not 100 percent. What's worse is that the whiplash had actually aggravated an old swimming injury in my shoulder… My wife had been going to Sean and recommended I give him a shot. I was blown away, from the first visit… By the end of the month I was better than I had been before the accident.” Adam S.

As I prepared to write this blog post I realized I needed to round up some testimonials to share. I’m passionate about the treatment of whiplash using acupuncture because I’ve seen such great results, I should be able to find a couple people who are willing to talk about their experiences, right? I thought I would have to spend a lot of time tracking down former patients and then hope that they would get back to me in a timely manner, but before I did that I decided to take a quick look at my testimonials page to see if I already had something useful or not. It turns out I’m not the only one who’s passionate about the treatment of whiplash with acupuncture. I’ve included snippets in this article, but some of the reviews my former patients have left me are very humbling. See for yourself!

If you're curious about Sports Medicine Acupuncture and how it's different from regular acupuncture, check out my previous blog post! If you'd like to book an appointment, please click the "Schedule Now" button in the sidebar or send us an email through the Contact Us form. I've been told by some of my patients that it can be hard to find an Acupuncturist in San Diego who's willing to work with a Lawyer on a Lien basis. We have no trouble taking a Lien. We're also happy to verify your medical insurance if this is not related to a motor vehicle accident and you're just looking to fix your chronic or acute neck pain.